With the recent development of so-called “smart watches”, designed to communicate with modern smartphones to display notifications, and in many cases run various applications on the watch, I felt that it would be a good idea to document the history of the smart watch.

After all, the modern smart watch is far from a new idea – watches that could run user-installed software have existed since Seiko’s Wrist Information System in 1984, and notifications have been pushed to watches since Seiko’s Receptor in 1990, and Swatch’s the Beep in 1991.

I’m going to stretch the definition of smart watch a bit for this history – the definition I’m operating under is something like this: “A watch that has functions in addition to timekeeping-related functions, such as calculation, data storage, scheduling beyond an alarm, ability to load arbitrary code, music (beyond alarm tones) and/or video playback, or reception and/or transmission of radio signals for functions other than setting time.”

Also, due to the existence of various devices that have watch-like form factors, but are not meant to be worn as watches, I’m going to restrict this discussion to wrist watches.

So, this is part 1, which means that we’re starting from the beginning of smart watch history. 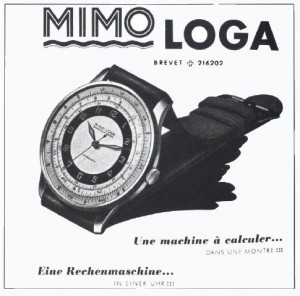 Given the definition I gave above, the first smart watch would almost certainly be 1940’s Mimo-Loga, which added the C and D logarithmic scales from a slide rule to the watch’s bezel, adding calculation functions to the wrist watch, which would later become a standard of “aviation-style” analog (and the occasional digital) watches.

A few weeks later, Breitling patented the design that would become the Chronomat, which was the first slide rule chronograph wrist watch. (A chronograph, being a time-keeping function, does not count as a smart watch function, however.)

That said, these are purely mechanical watches, with no actual processing power – the actual calculations were done by the user, and the scales on the slide rule were essentially a lookup table. While slide rule watches are certainly interesting, they’re not much more than a curiosity as far as the history of the smart watch is concerned, and there’s already an excellent history of slide rule watches online, written by Art Simon. 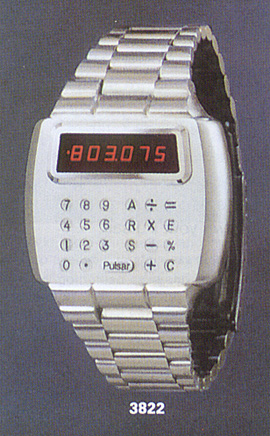 Pulsar, who brought out the original LED digital watch in 1972, brought out a calculator watch in 1975. While there are references to a “Calcron” that came out earlier, it appears that the Calcron may just be a wrist calculator, with no timekeeping functions.

Other manufacturers also made calculator watches, including the Uranus (which had finger-friendly buttons, instead of Pulsar’s tiny buttons that required the use of a stylus), and HP’s HP-01 from 1977, which added the ability to perform time calculations – including connecting the stopwatch to the calculator, possibly making it one of the smartest “pure” calculator watches ever produced.

Sinclair also brought out a wrist calculator kit, but it did not have any timekeeping functions.

Unfortunately, all of these watches used LED displays, which had rather high power consumption. LCD technology was the answer, and the Japanese jumped on it very quickly. 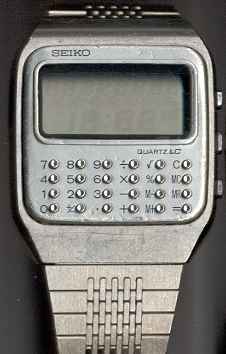 One of the first LCD calculator watches (which have been covered extensively on PocketCalculatorShow.com’s Nerd Watch Museum), the Seiko C153, came out in 1977. The Japanese would quickly dominate the calculator watch market, with Citizen and Casio getting in the game as well, and to this day, Casio still produces one of their 1980’s calculator watch designs, the CA53W-1.

So, with an always-on display that could be customized to whatever pattern the manufacturer desired, and available processing power capable of performing arithmetic, watch manufacturers soon branched out from the basic calculator watch.

The first application of the technology, beyond calculator watches, was gaming watches – watches that had games built in. One of the earliest gaming watches was 1977’s DataTime Casino Game Watch, featured in the Nerd Watch Museum. Later, Casio and Armitron would get into making game watches.

In addition, musical watches began coming out around in the early 1980s.

Next entry, I’ll start posting about the even smarter watches that came out in the 1980s.