Yesterday, I covered the history of the smart watch from the 1940s slide rule watch, to the 1970s calculator watch, and dipped into the 1980s with musical and gaming watches.

However, while some of those watches had processing ability, it was very limited, not programmable, and transient – once you were done processing data, you got back to the clock functionality, and whatever you were doing was gone. But, with Japanese electronics makers competing, some real innovation started.

I’ll again refer to PocketCalculatorShow.com’s Nerd Watch Museum for much of this – it’s an excellent resource for this. 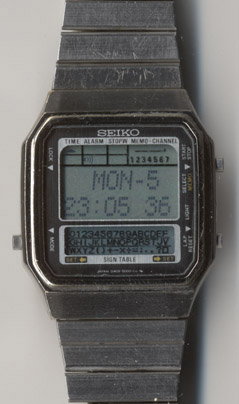 In 1982, Seiko brought out their D409 memory watch, one of the first. It only had 112 bytes of memory, with arbitrary data in the “memos” stored in the watch.

This ultimately became a common theme among so-called databank watches, and to this day, Casio produces databank watches that follow a similar concept. (The modern ones do have keypads for entering data. No, that isn’t a touchscreen on the Seiko to the right.)

Before I do so, however, I need to cover what might be the coolest smart watch ever produced, though. It may not have much processing ability, but it does multimedia, and James Bond wore one. 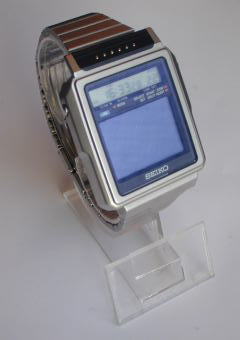 That watch is Seiko’s TV Watch, also from 1982. Unfortunately, the display had poor contrast, and you had to have an accessory to actually receive TV signals, but who cares, it’s an actual TV screen on an actual watch?

Due to LCD technology’s state, it would be quite a long time before the TV watch (or any multimedia watches beyond AM/FM radios) would be investigated again, though.

So, what did watch designers do in the mean time?

However, we still don’t have programmability, and there’s no communications directed at the watch. 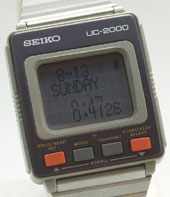 In 1984, the first problem was solved – at least partially – by Seiko. (This post is looking like a Seiko ad, but I swear, I’m not trying to do that.)

Both watches were intended to work with a keyboard dock for entering data on the go, making data entry far easier than most databank watches. However, the UC-2000 was marketed alongside an even larger keyboard dock, that included a thermal printer, a Z80 processor, and a ROM cartridge slot.

This larger dock, the UC-2200, could actually run Microsoft BASIC (using the watch as a display), but it could also uplaod some small programs (written by Seiko, but it proved the ability of the watch to handle local processing of arbitrary code) to the watch’s RAM.

Also, computer connectivity began with Seiko’s lower-end RC-1000, and Apple II-specific UC-2001 (a variant of the UC-2000). This line would continue up until the early 1990s, with a few other models, including the Epson (a division of Seiko) RC-20 touchscreen watch. 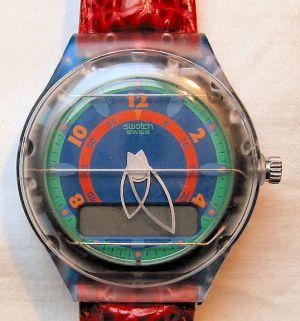 The next step, however, was the pager watch, supporting wireless communications directly aimed at the user’s watch.

Seiko and Swatch came out with pager watches around the same time – Seiko’s Receptor in 1990, using a subcarrier on broadcast FM stations, and Swatch’s the Beep in 1991, using traditional paging protocols in Europe. Later, Timex would join the game in 1995 with their Beepwear.

There was one more interesting watch from this time period, though, that I’d like to cover – Timex’s Datalink. It used flashing patterns on a CRT display of a computer to download data. Not that interesting overall, except for the link method being rather novel.

Next time, we’ll head into the 2000s, and cover smart watches that can legitimately be called PDAs, as well as smarter variations on the pager watch.

One Reply to “The history of the smart watch, part 2 – storage, programmability, multimedia, and communication”