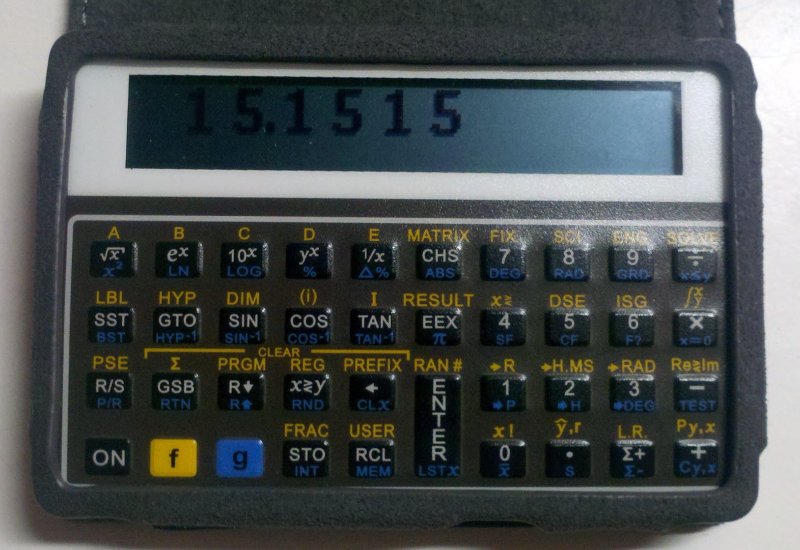 A couple weeks ago, I found the SwissMicros credit card-sized clones of the Hewlett-Packard Voyager series of programmable calculators, and decided to order one. Today, my calculator arrived, so it’s review time! (And, I apologize in advance for the crappy camera phone photos.)

I ordered a DM-15CC with the aluminum case, rather than the DM-15 Silver Edition – decided that I didn’t need the titanium case, and it was a good way to save some cash. For the record, the SwissMicros site says that the Silver Edition’s upgrades are the titanium case, a “new keypad design” (although two owners of the Silver Edition mentioned over on the MoHPC Forum that the keyboards have not changed significantly), and a slim LCD font. I also ordered the leather flip case.

We’ll start with the packaging. The box was surprisingly large, although quite thin, relative to the size of the calculator. Calculator was shipped in a neoprene (or similar material) pouch, in a plastic bag, with a second plastic bag containing the flip case. Both bags were taped to the inside of the box using double-stick tape.

First thing I really noticed, though, was the extremely high force required to actuate keys. The calculator uses metal snap domes under a molded plastic (most likely mylar, possibly polycarbonate) membrane, which means that the keys are highly tactile. However, the snap domes used are extremely stiff. I’ve read that the keyboards do eventually break in and get softer, which I certainly hope is true. In addition, due to the fact that the membrane (which also forms the LCD cover) is adhered to the calculator, I felt and heard some signs of adhesive sticking and unsticking in a couple places of the keyboard. Hopefully, with time, this gets better – I fully understand that this is a small-scale project, and to expect full commercial quality is a bit much. (Just realize that going in – you’re buying something that’s not far above DIY grade, although it does a good job of at least looking professional.)

At its heart, this calculator is an emulator of the HP-15C (running on an ARM processor, although a different family from what HP is using in the ARM-based current-production 12C and the 15C Limited Edition), and therefore has largely the same feature set and user interface as a real 15C. However, SwissMicros has taken advantage of the fact that they’re using modern hardware and a graphic LCD (instead of a 7 segment LCD with dedicated annunciators) to make a few improvements to the capabilities and user interface of the calculator.

Due to having much more available memory, the DM-15C ships with firmware that provides 230 registers of available memory to the emulator (on an HP calculator, a register is 7 bytes, or 14 nibbles/digits). However, for compatibility reasons, SwissMicros offers firmware with either 65 registers (same as a real 15C) or 129 registers.

The calculator has a USB to serial adapter chip on-board, which is used for connectivity to the serial console (which is primarily used for backing up and restoring the calculator’s memory) as well as reflashing the firmware.

The graphic LCD is used to good effect on this calculator – the most noticeable thing is that everything is displayed using bitmap fonts, rather than with the limitations of a 7 segment display. However, this does mean that the annunciators look rather ugly, due to the low resolution. An annunciator is added to the left side of the display, however, for commands that request additional input after issuing the command (however, LBL appears to not use it – maybe a future firmware release will fix this).

A few additional configuration features are available – LCD contrast (here there be dragons – it is VERY easy to take LCD contrast out of range quickly, and not be able to see what you’re doing to fix it!), CPU speed (12 or 48 MHz – I’m running mine at 12 MHz), and which font is in use (on the DM-15C, there’s two fonts, one that tries to simulate the 7-segment display, and one bitmap font depending on firmware, the other calculators have both bitmap fonts as more space is available). I wish there were a facility to do user-designed fonts, but that’s not at all critical.

Let’s get this out of the way right now – this is not a mass-produced product. This is a low-volume product made by fans of HP’s calculators, and as such, it does have a bit of a DIY feel to it. That also explains the price, really. Considering that, though, it looks great.

As I mentioned, the keyboard has extremely high key force. Also, the calculator has a noticeable key delay (and it’s even worse in 12 MHz mode, as far as I can tell), causing some missed keystrokes. However, it is quite tactile, and also has good auditory feedback. Overall, the keyboard is mediocre, I’d say. Far from the worst calculator keyboard out there, but not exactly good. And, it can probably be partially fixed in software.

Now for a pretty picture, with a library card (for size comparison), and my HP 50g (for size and display comparison): 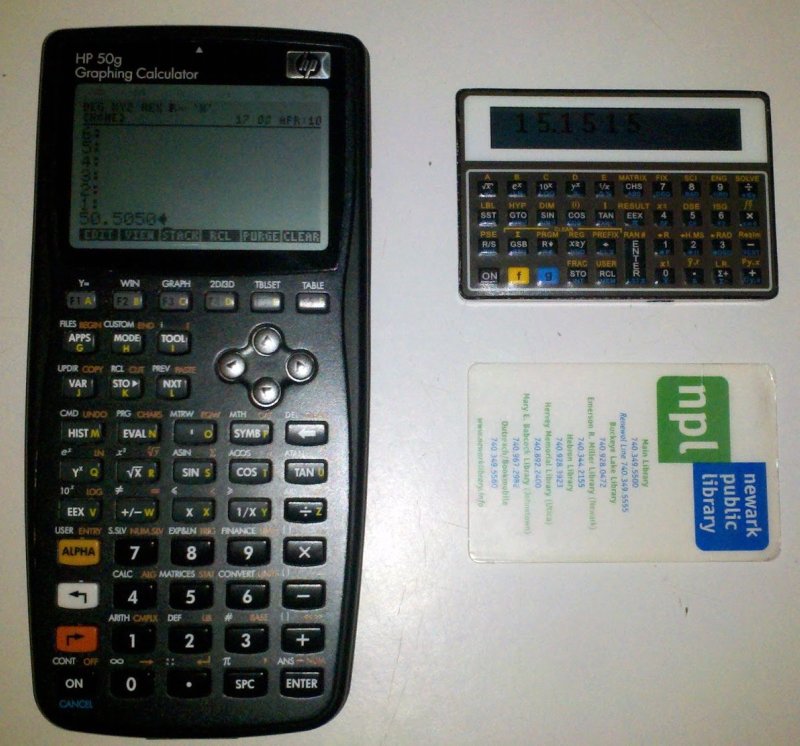 Like I said earlier, and as you can clearly see, the display has a rather poor contrast ratio. The picture does make it look worse than it actually is (the lede image is somewhat more representative), but still, it’s not good. The contrast is adjustable (CHS-ON, then + and – do small adjustments (on the first number in the display), ∑+ and 3 do major adjustments (the second number in the display)), but here there be dragons – by default, the calculator comes with the contrast set to 00-5. 00-4 is so faint that you can barely read it, much over 00-6 is so dark you can barely read it, and going any further, you may not be able to read the screen at all. I’m using 12-4, for what it’s worth. Really, some firmware work should be done here to improve the user interface (why are the ranges implemented like separate ranges, when they have massive overlap?), and lock out useless modes. I did also notice a speck of dust under the display, but I was able to peel the top membrane back, and get the dust out.

As far as the design of the calculator goes, earlier versions of the DM-15CC used a PCB sandwich style construction, as seen in this YouTube video of a preproduction sample – essentially, a thick middle PCB with no copper or silkscreen layers was used as the chassis, with a front PCB carrying all of the electronics, and a rear PCB as the back. This is a method that Dave Jones discussed in EEVblog #130, about the µCalc, his own scientific credit card-sized calculator design. That said, the DM-15CC extended upon that idea by using a printed membrane front panel to look more professional, instead of using the PCB itself as the front panel, and it did not use the rear PCB for anything, unlike the µCalc.

However, the unit that I received has switched to a different construction method. The front PCB, which carries the battery, LCD connector (with the LCD attached to the bottom of the PCB and viewable through a hole in the PCB), all electronics, and the keyboard snap domes, is still there, as is the membrane that covers the PCB, holds the snap domes in place, protects the LCD, and makes the front panel and keyboard buttons. The middle and rear PCBs are replaced by an aluminum case (with padding to support and protect the LCD), which serves as a much better looking case. Unfortunately, the edge of the aluminum is somewhat rough, negatively affecting the fit and finish of the calculator, but it still looks more professional than a PCB chassis. Also, SwissMicros chose to use a label to show the quick reference information from the back of the original HP 15C, rather than using the copper layer of a rear PCB, as they did on the early revisions. I’m told that Silver Edition calculators don’t have this label, though. 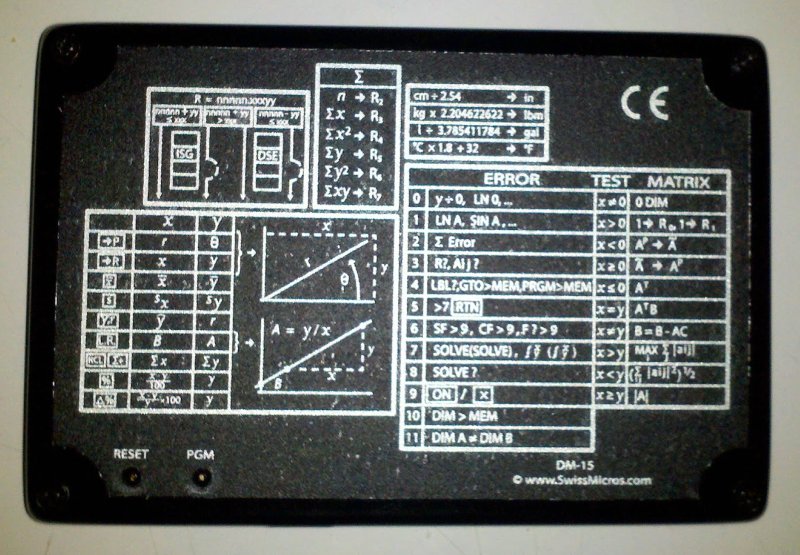 One annoyance that owners of the aluminum cased calculators have reported is that the program and reset holes on the rear of the case are extremely small – too small to actually reach those buttons with a paperclip. Unfortunately, my DM-15CC is no exception. Apparently, these holes were enlarged in the Silver Edition, but not on mine. This means that disassembly of the calculator is effectively required to reflash firmware. Luckily, this is easy, and gives me a great excuse to take it apart (not that I needed one). Four screws, and the back cover lifts off. (This is also required for battery swaps. Apparently you have 30 seconds to do one, before the calculator loses memory… not as big of a deal, though, given that you can back it up over USB.) 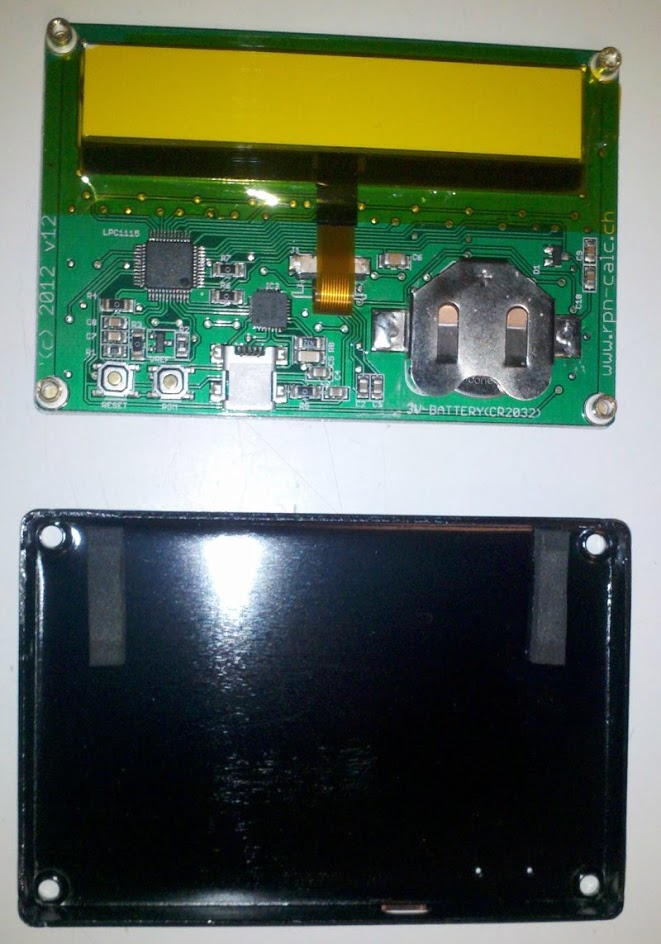 Also, as I did get the leather flip case… it seems to be fairly decent quality, although it does have the slight annoyance that it makes the bottom row of keys a bit harder to hit.

Well, we’ve opened it up, and I don’t like the slim font that it shipped with (and due to memory constraints, the DM-15 calculators can only hold one bitmap font at a time), so might as well reflash it. In fact, all of the photos here were shot with the thick font firmware already installed. SwissMicros provides instructions for doing the reflash on Windows, but my main OS is OS X, and while I could run a VM, the tools exist to do the flash on OS X.

Here’s how I did it, and this procedure should work on any SwissMicros calculator on OS X:

While this calculator does have some issues that need to be resolved, I’d generally say that I’m happy with my purchase, and definitely happy that it exists. I’m not sure I’d buy a second one, as I rarely actually NEED a calculator this small, but this is a nice novelty that’s highly useful.

All in all, a nice calculator, despite its flaws.

Update, 2013-08-11: Just thought I’d post an update, and mention that the input annunciator bug has been fixed in the V14 firmware. Also, the V14 firmware requires confirmation of LCD contrast setting changes, which reduces the risk of picking a bad setting. David mentioned to me that some users may find that their calculators need settings that I find useless on my calculator, so the entire range needs to be there, though. Check back for another update soon.