So, I set a new theme here.

Not sure if I like it – I might just fix the issues with the CSS on the old theme and go back to it, but… for now, see how you guys like this. 🙂

Put this image in your signature on the forums that you’re on that allow it, and spread the 09f9 and the 455f.

This was inspired by badmouth.net’s Free Speech flag, but with some differences. Due to the second AACS key being found, I decided to append it to the end, with 0x00 separating the two keys.

Therefore, the constituent colors are:

Code to put this in your signature on most forums:

For some other forums:

We decided at my work to throw out a bunch of our old P3 parts machines – after all, we’re going to FINALLY be phasing these things out.

So, I had to grab one, as my server, bhtooefr.ath.cx, has been down for quite a while due to a broken power supply (and the P3-700 wasn’t really happy with the load, anyway… especially when it was overheating. Damn ultraportable laptops when held at 100% load… ;))

The new server’s a Dell Dimension 2100. Don’t laugh, the mobo’s made by Intel. No optical drive, but who cares… I’ve got enough optical drives lying around. No hard drive, either, but I’ve got a laptop HDD adapter lying around somewhere, to use the old server’s 40 GB drive. If push really comes to shove, I use the 8.4 GB drive I’ve got lying around, and be damn judicious with the space.

Oh, and I will be running Linux here (the old server ran Windows 2000.) I’ve decided, since I’ve gotten rather familiar with Ubuntu on my laptop, I’ll run Ubuntu Server on this.

FTP and remote desktop services WILL be restored soon for all your downloading and proxy dodging pleasure. Just wait a bit.  😉

Oh, and I’ll have SSH access for when VNC is overkill, and I might even get fancy and implement a VPN so you can REALLY dodge proxies. 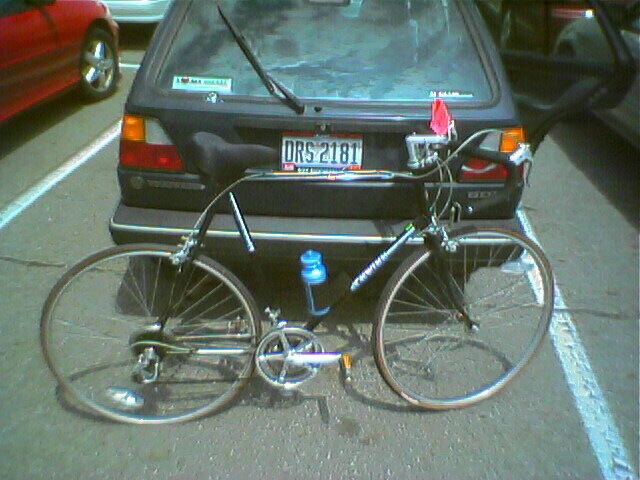 Some other stuff, and it’s good to ride now! 😀 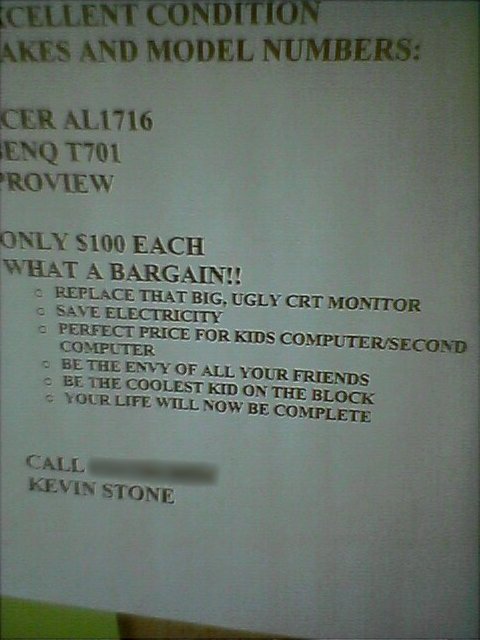 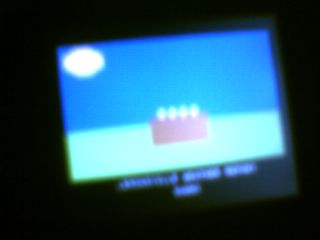 Pretty easy to use… download, extract, put disk images in the Disks directory, and (on Windows or Mac) run the relevant script, or enter the following command on Linux (taken RIGHT from the Windows CMD file, just with proper slashes instead of backslashes, and cp instead of copy ;)):

That cp operation isn’t necessary if you use Sprint – and if you do use Sprint, upload it to your phone using Rumkin’s Phone Uploader. (Upload the AppleIIGo.jar (not the jad) file from the AppleIIGo directory.)

I got rid of my Civic today… I think the pictures will say it all. 😀 (They had a bit of a problem getting it on the trailer without ramps… so they took a running start. 😆

And then they strapped it on their trailer and left! 😀 I’m all of… um… $215 richer. Yay. At least I don’t have that pile rotting up the driveway any more… :p

Now, when they saw my Golf, they tried to get me to sell it, but… I just got that thing running. Glow plugs help a LOT with starting a diesel in this damn cold weather. 😉 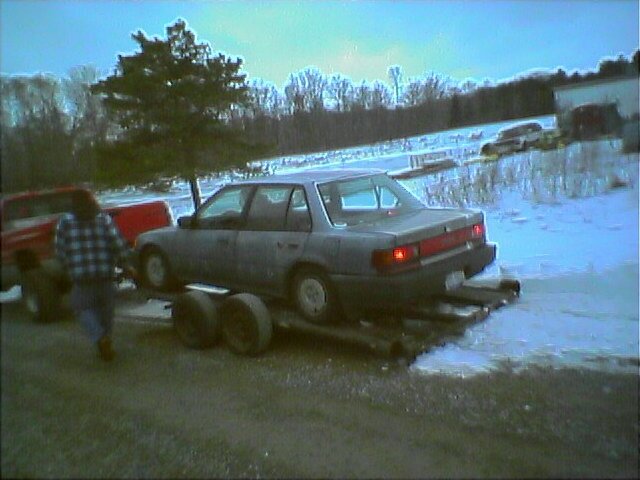 So, anyway, the other thing. I’ve decided to start running Linux on this ThinkPad. So, I decided to go with the flavor of the month, to try to make my life as easy as possible. That means Ubuntu.

I burned the CDs of my recovery partition, and saved ISOs of them onto my server. That way, I could restore the system in the future despite proceeding to nuke that partition. After that, I realized that I needed a hell of a lot more HDD space than that… so I started deleting crap, and got myself TONS of room. After some SNAFUs with defragging, then shrinking the partition, Ubuntu installed just fine.

Now, here’s something that is awesome. In my previous attempts to use Linux, I found that I had to install a whole bunch of BS to get the tiniest thing to work.

On Ubuntu… it just… works. Sure, I’ve had to install the occasional package now and then, but Ubuntu’s howtos actually… make sense! And are… helpful! And I’ve not noticed the dependency hell that I found on the RPM-based distros I’ve used. Then again, I am trying to stay within the distro’s packages when possible…

Anyway, I’ve only booted into Windows a couple times. Funny part is, Windows has slowed down a LOT since this… 😆

Now’s the time to act. END_OF_DOCUMENT_TOKEN_TO_BE_REPLACED

Basically, I need some extra dough, so I’m opening a CafePress store.

You’ll see a variety of shirts, most of which will either be VW or technology related, but with some random funny stuff that comes to mind mixed in.

The shop URL will be: http://www.cafepress.com/bhtooefr

I’ll rotate the designs out every month.