If you found this article, you’ve probably gotten a DRIVER_IRQL_NOT_LESS_OR_EQUAL (aka STOP 0x000000D1 or 0xD1) error on fetnd5.sys when PXE booting Windows XP on a VIA EPIA 5000 or 800, or any other motherboard with a VT6103 ethernet controller. This may even apply to any other VIA Rhine ethernet controller. (Really, I’m writing this blog post because I ran into this for the second time, and want the answer to be in search engines, instead of buried in years-old IRC logs.)

END_OF_DOCUMENT_TOKEN_TO_BE_REPLACED

You may notice that this blog looks a lot older than it did last time you looked at it. END_OF_DOCUMENT_TOKEN_TO_BE_REPLACED

I decided it’d be an interesting project to try to benchmark the Microsoft BASICs – I’ve always seen the claim that QBASIC was slower than QuickBASIC, and I thought I’d put that to the test. END_OF_DOCUMENT_TOKEN_TO_BE_REPLACED

I recently bought an HP OmniBook 430 that needed a system ROM card, which has to be on a linear flash card. END_OF_DOCUMENT_TOKEN_TO_BE_REPLACED

So, I finished resurrecting my mainframe the other day.

When I was in Kansas City for KansasFest, I bought an RS/6000 7011-250, which uses the smallest chassis capable of holding 32-bit MCA cards that IBM ever produced – for comparison, I’d say it’s about the size of a Quadro 610 or Power Mac 6100, albeit a bit deeper. (It was also the first PowerPC machine ever produced (predating the PowerPC Macs by a few months), using a 66 or (in my machine) 80 MHz CPU.) This allowed me to physically downsize the machine significantly with minimal loss in functionality.

I installed the P/390 card set and installed AIX while at KansasFest, but was unable to get the mainframe actually running for several reasons. Ended up putting the project on hold for various reasons (including building the Mimeo).

Lately, decided to get back at it. END_OF_DOCUMENT_TOKEN_TO_BE_REPLACED 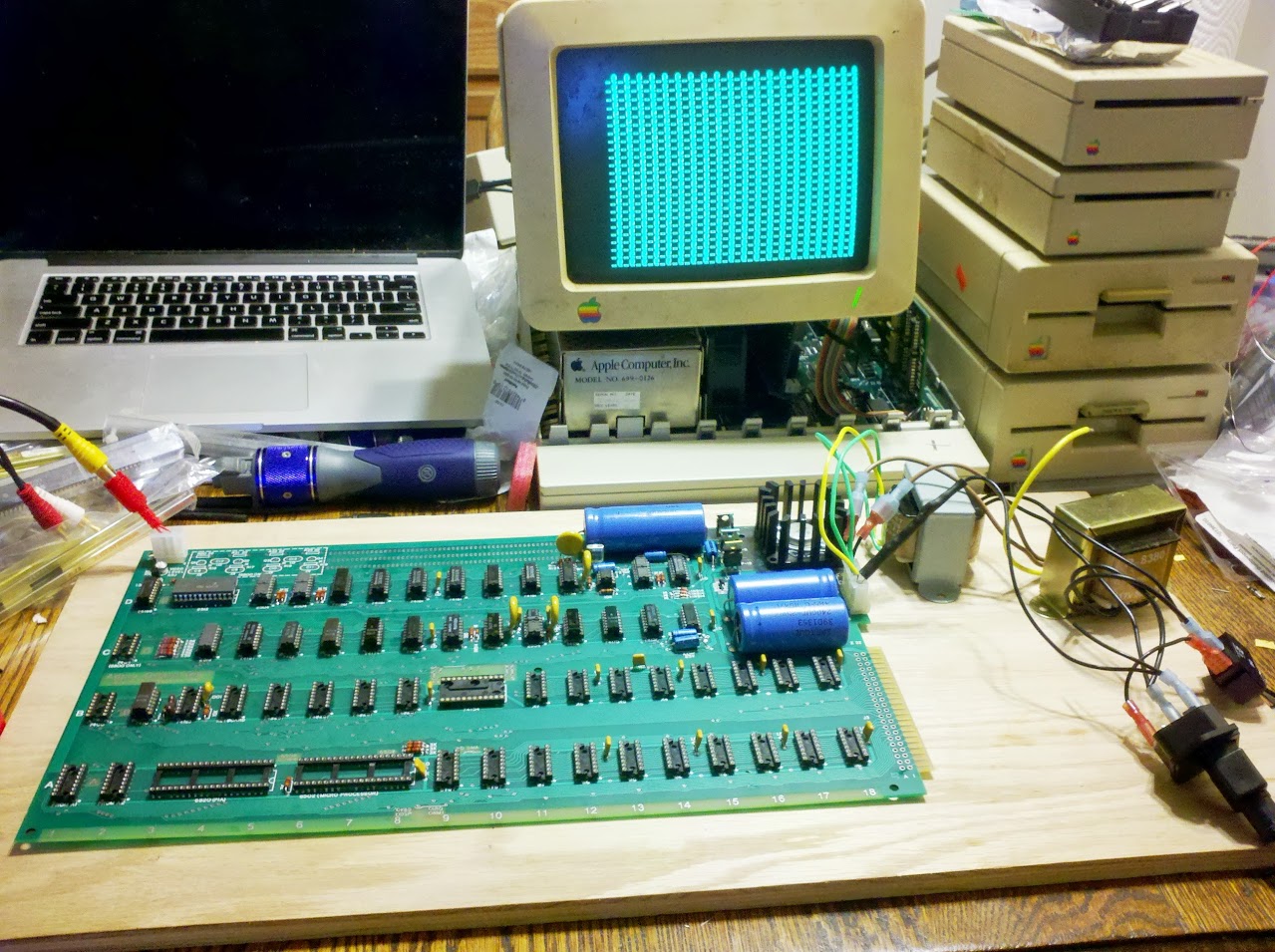 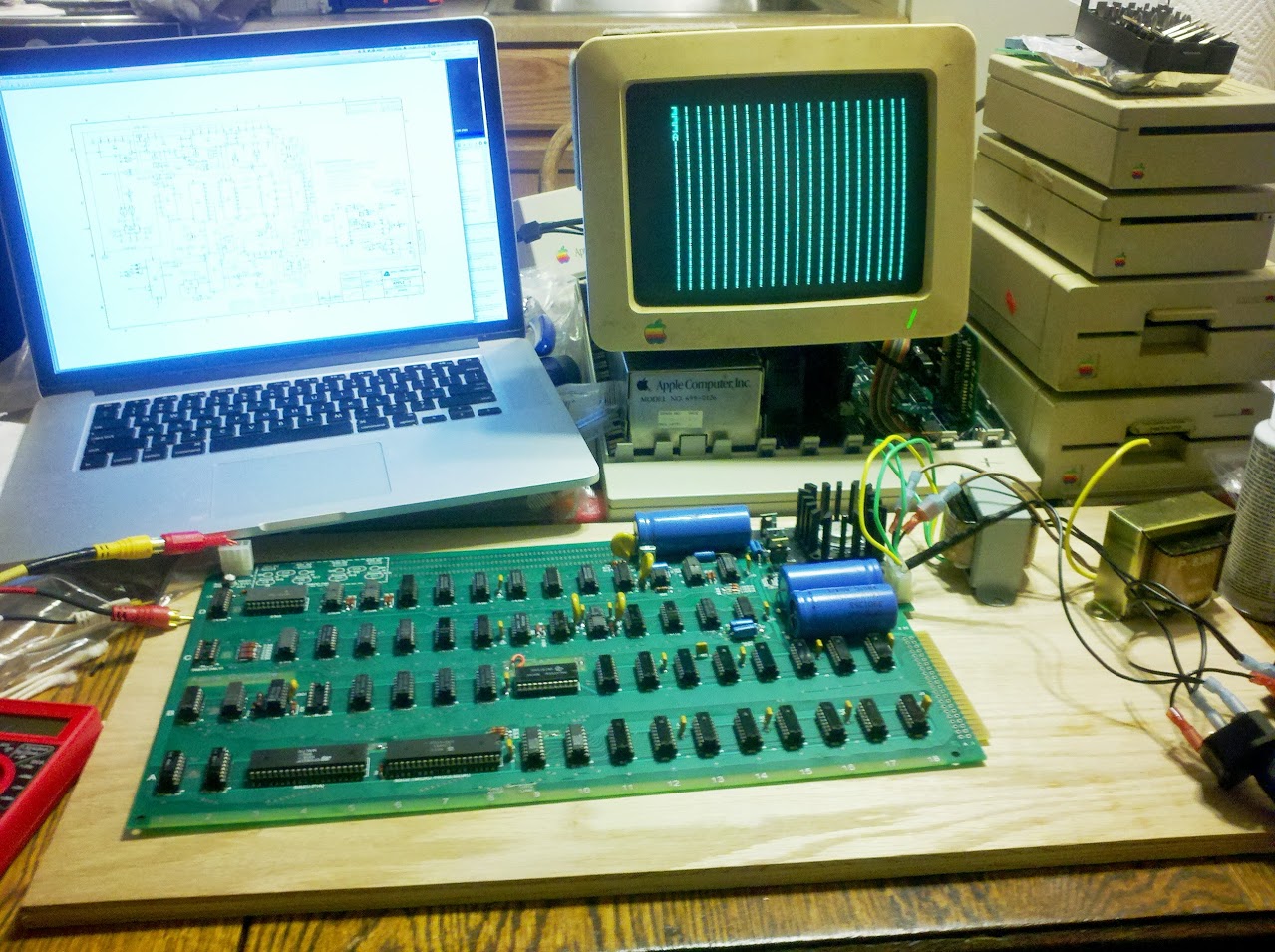 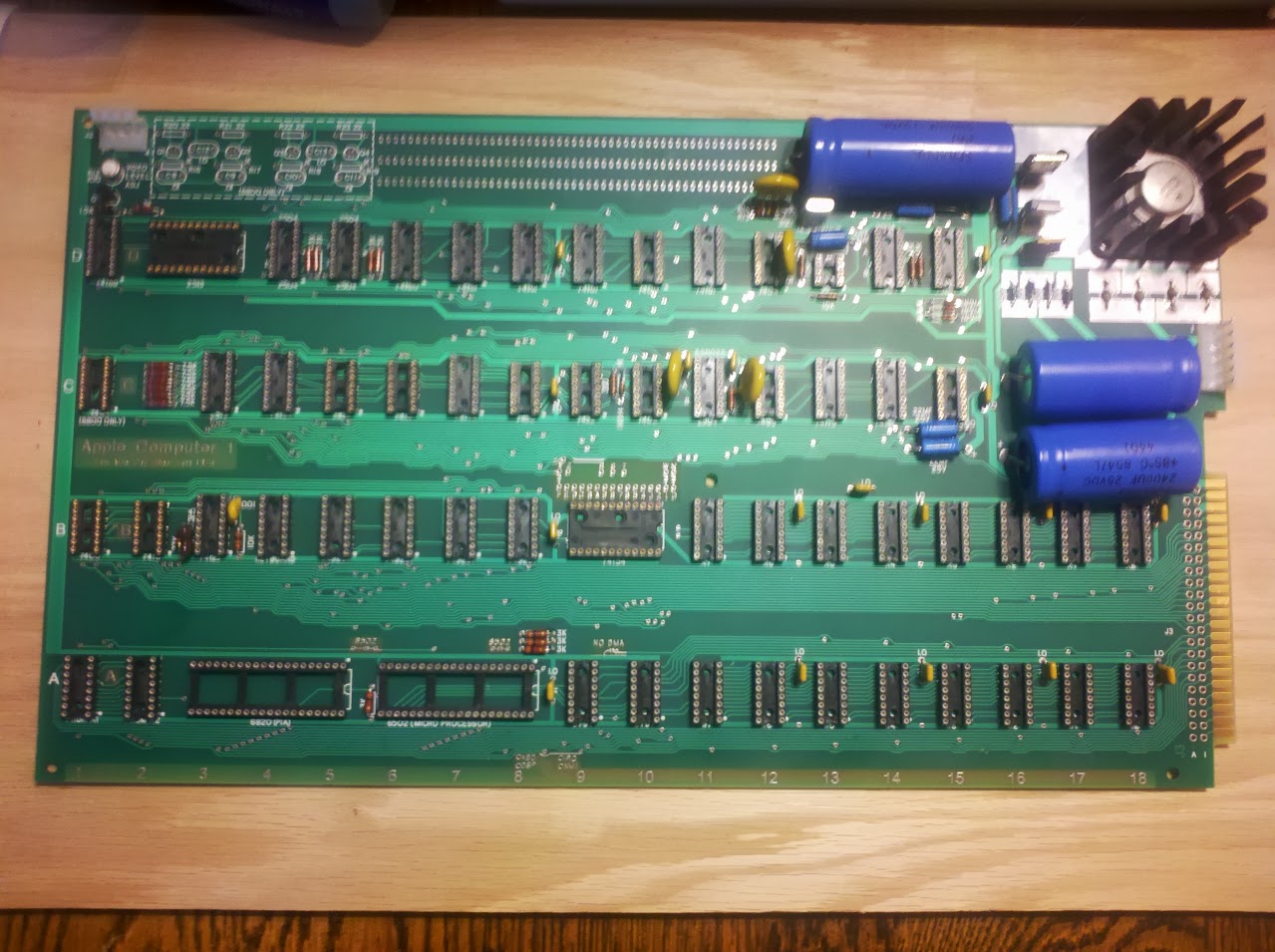 I know, it’s an out of focus cell phone shot, but I’ve already got it drying after cleaning the flux, and don’t want to take another shot.

Resolution on the capacitor issue was simply going ahead and using the supplied caps, as they should not negatively (and may positively) affect function, and will only negatively affect authenticity, of which this has none anyway, so…

Yes, I got the top 2400 µF cap so that you can’t read the printing on it. Purely a cosmetic issue, kicking myself for doing it, and I caught it too late to easily fix it. (I could obviously fix it now, but it’d generally be a pain, and some of that is on the ground plane section of the power supply, which is a bear. Not as bad as the 7905’s ground section, but bad.)

I’m still waiting on resolution for the capacitor issue, but I decided that I might as well build the cassette interface. 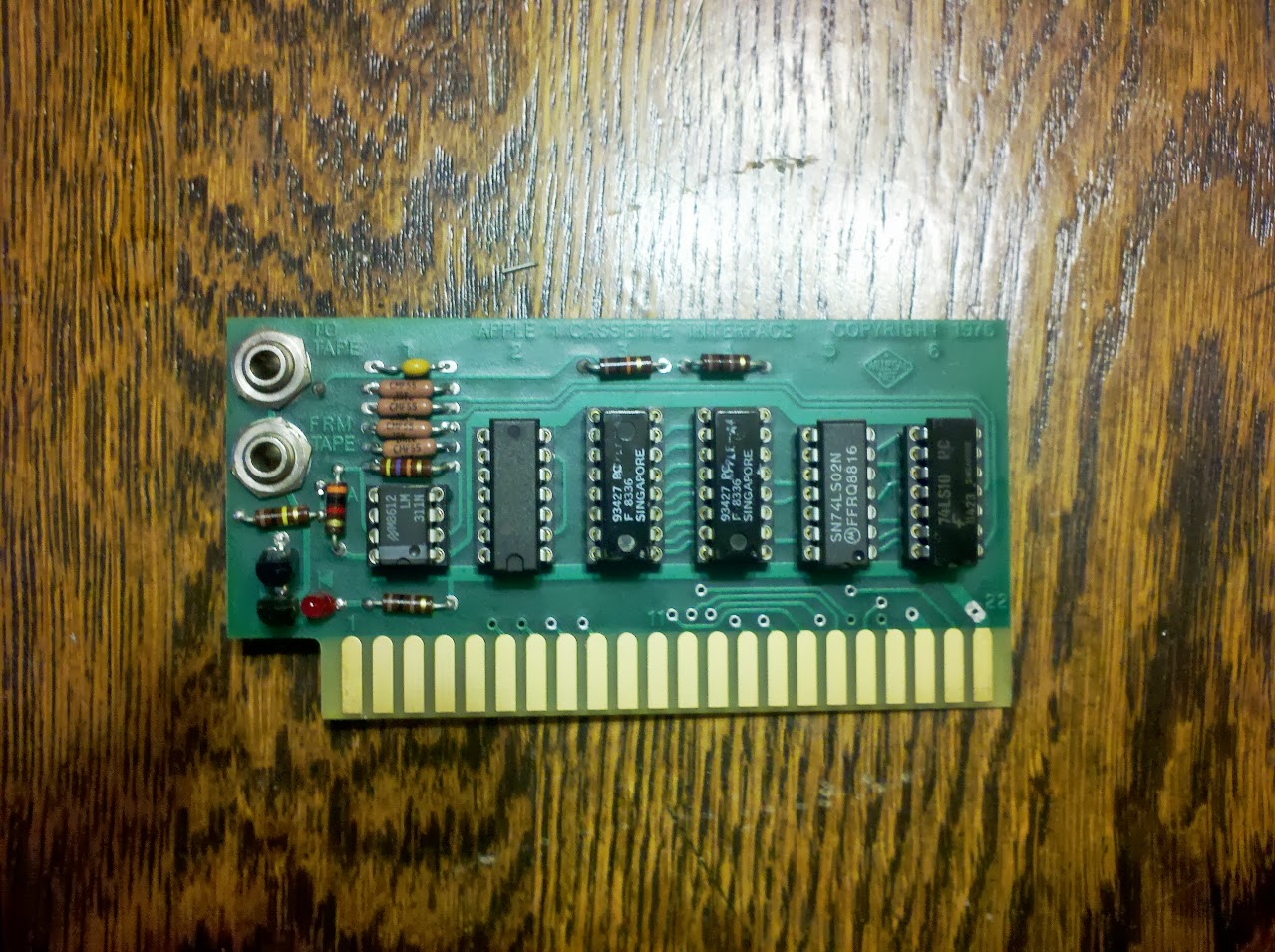 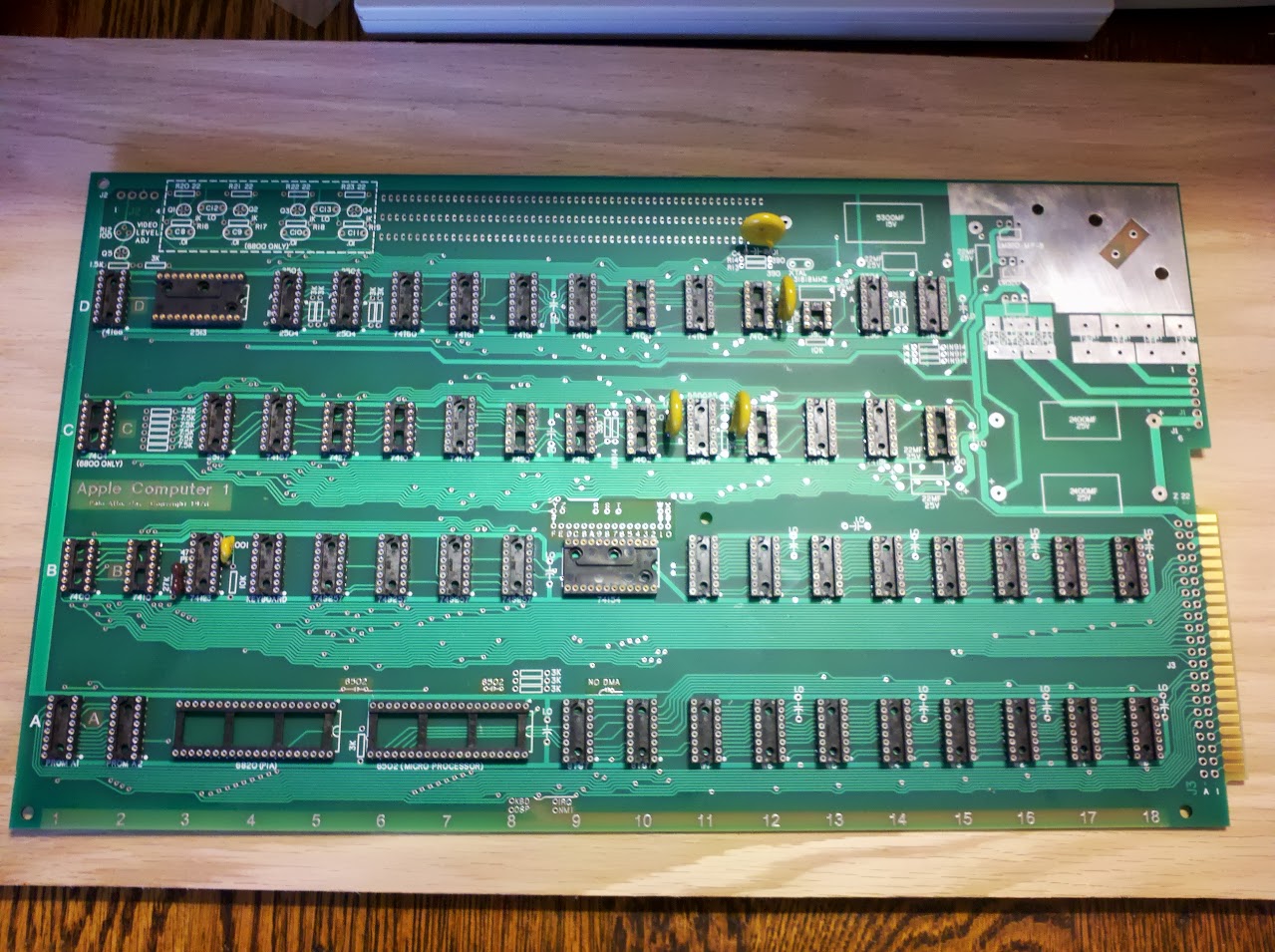 All sockets are in, so I’m to chapter 2, step 10 of the assembly guide – the installation of the seventeen 0.1 µF decoupling capacitors.

Here’s the problem: Unicorn shipped 1.0 µF caps. This matches the silkscreen on the PCB, but the Mimeo manual makes a point of mentioning that real Apple-1 computers used 0.1 µF instead. I could actually install the incorrect caps, and it’d probably be fine, but I’ll wait for Unicorn.

In any case, step 11 (installing the other six small caps) isn’t actually dependent on step 10, so I went ahead and did it. The next step is another power/ground short check, and while I could easily continue on (really, if I wanted to, all the way to initial power-up, because the decoupling caps aren’t a factor until I start stuffing chips in), I figure it’s best to stop here, so I don’t deviate too far from the manual (and then have more work to do to diagnose a fault if I do mess up). 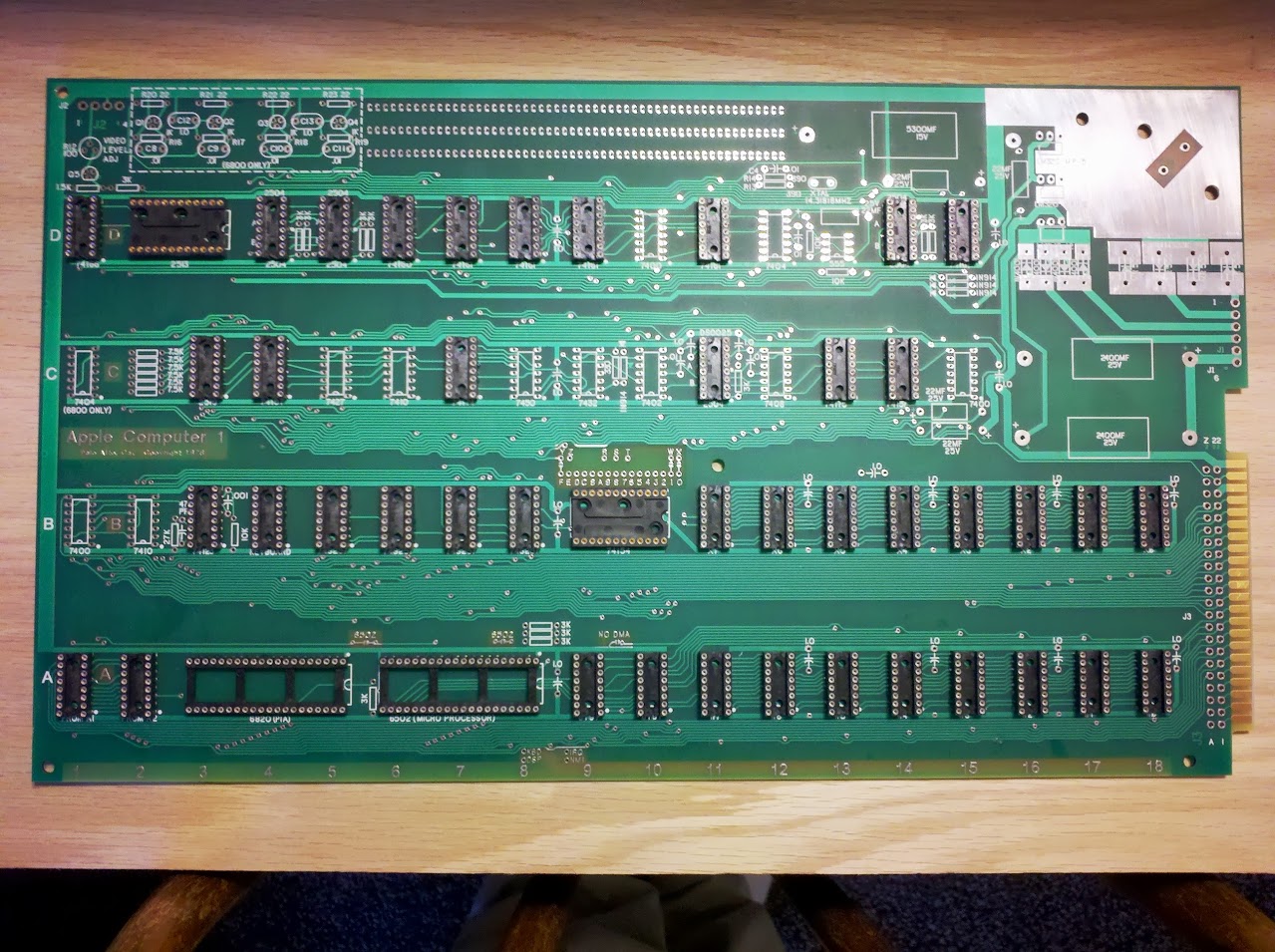 800 solder joints to date. 176 more to go to get the rest of the sockets in, then it’s on to the discrete components.