So, I finished resurrecting my mainframe the other day.

When I was in Kansas City for KansasFest, I bought an RS/6000 7011-250, which uses the smallest chassis capable of holding 32-bit MCA cards that IBM ever produced – for comparison, I’d say it’s about the size of a Quadro 610 or Power Mac 6100, albeit a bit deeper. (It was also the first PowerPC machine ever produced (predating the PowerPC Macs by a few months), using a 66 or (in my machine) 80 MHz CPU.) This allowed me to physically downsize the machine significantly with minimal loss in functionality.

I installed the P/390 card set and installed AIX while at KansasFest, but was unable to get the mainframe actually running for several reasons. Ended up putting the project on hold for various reasons (including building the Mimeo).

Lately, decided to get back at it.

I had been trying to use another copy of VM/ESA V2R4, but it became clear that it had major issues in an AIX environment. Not insurmountable, but major nonetheless, and frankly too much of a pain in the ass for me to be bothered with. So, I went back to the trusty ADCD.

There were some issues with the AIX version of the DEVMAP, but those were much more minor. (Namely, the R/390 software freaks out if nonexistent drives are referenced (and non-existent drives for MVS and VSE were very much referenced, and the devmap was pointing at the wrong address to IPL from.)

Also, I had messed up with copying some of the LIC to the system manually (forgot to convert some line endings from DOS to Unix), which prevented anything close to a successful IPL, even though I was getting activity. So, fixed that. Once that was fixed, the terminals weren’t immediately dying.

End result? Well, here it is, connected to the mainframe via the AIX side: 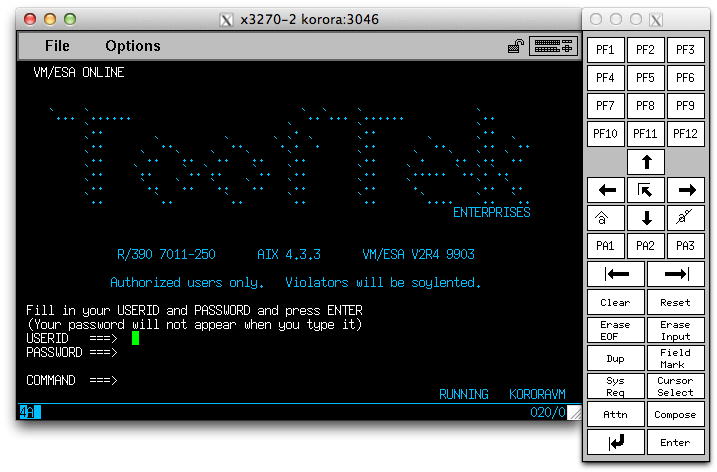 Next up was TCP/IP. I freaking hate IBM mainframe OS TCP/IP configuration, especially when on AIX, turns out that you really are supposed to point the friggin’ thing at a nonexistent device for it to work (/dev/ent0,standard – when /dev/ent0 doesn’t exist). That was slightly frustrating. But, that works too: 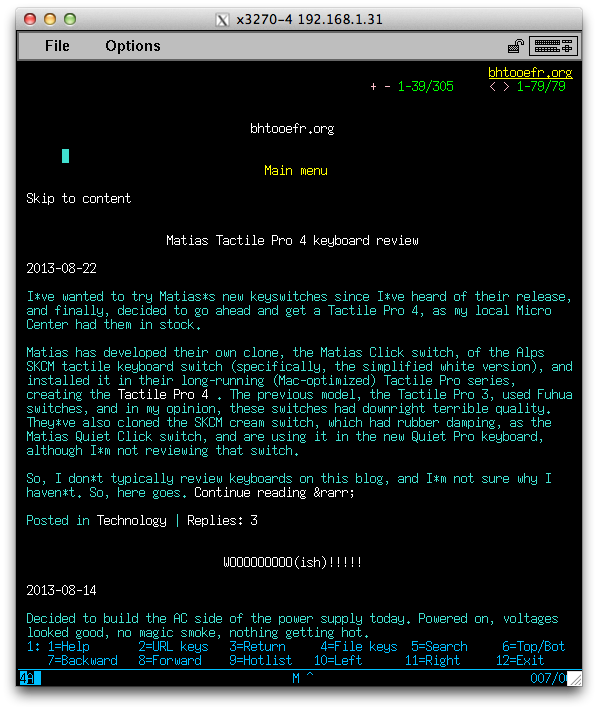 So, let’s go into what software you need.

A lot of the needed software is actually integrated, even. For instance, unzip and PCOMM aren’t needed, because unzip and XANT (a primitive 3270 terminal emulator, but good enough for our purposes) are included with the R/390 drivers.

I highly recommend reading the R/390 info that IBM has on their website. Also, the documentation included with your ADCDs is good to read (but AIX is a second-class citizen here, a lot of this is written for OS/2, so some of it may be wrong), as is the documentation in /usr/bin/r390 (and that includes studying the shell scripts, some of which you may need to modify for this application). Unfortunately, most of the real documentation is in an out-of-print manual, but that page and the resources I’ve pointed out give some info that can be used to stumble one’s way through.

You do have to install a ton of optional packages to get things working properly, and frankly, I can’t remember half of them. bos.dosutil (although if you copy things in by hand, it’s actually completely optional) and X11.compat.fnt.pc were the two big ones, as well as setting the language environment (for the whole OS) to IBM-850 instead of the default.

One Reply to “The latest incarnation of my mainframe”